Startseite »Analysis»Articles»A Resthouse for People on the Move

Because of the civil war in the 90s, there have always been many refugees in Serbia. It is something many people here can relate to and it is clear that we have to do something.“

Marco runs the former Starhostel in Belgrade, together with his brother and his cousin. Now, the house hosts different travellers: migrants trying to make their way to central Europe. There, they find a quiet space where they can recover, before they have to wait for days or even weeks under miserable conditions in front of the transitzones to Hungary.

Since the tightening and eventual closure of the Balkan Corridor, Belgrade has once again become an important travel hub for people on the move. Several hundred refugees arrive in Belgrade every day, mainly coming from Macedonia and Bulgaria.

Many refugees in Belgrade report about mistreatment on their way to Serbia. In Macedonia, people are often illegally pushed back to Greece and therefore have to take dangerous and very tiring routes. People arriving from Bulgaria often encounter violence and robberies on their way. Many arrive in Belgrade completely exhausted and sometimes with severe health issues.

A Shelter for People in Belgrade

K. and her daughter M. walked for 15 days through the mountains of Macedonia on their way to Germany. When the two arrived in Serbia they could hardly walk and had very swollen feet:

It was a very frightening journey. We had to walk through mountains and cross rivers. And not having food for two days and still having to walk for many hours was extremely hard.“

Travelling through Serbia is said to be relatively safe and only few people report about major problems with the Serbian police. Most people stay in Belgrade for several days and try to find some rest before continuing their journey towards Hungary and Austria.

Medico International and Moving Europe support the former hostel, which now serves as a resthouse. Here, up to 35 people can find a safe place to recuperate for a few days for free. Families, unaccompanied minors and sick people can mainly use the space. M. explains:

Finally we have a clean space where we can shower and wash our clothes. For us it is important to have privacy in our room and now we can sleep well for a few nights.“ 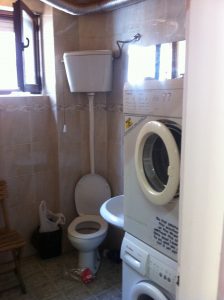 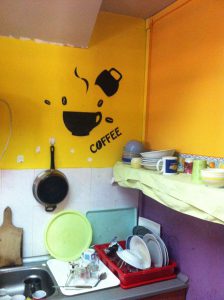 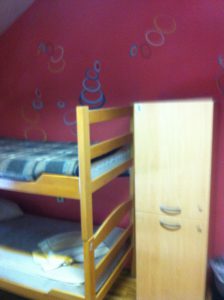 A Place to Recuperate

For Ahmed, who is traveling with his brother, the hostel is a space where he is treated with respect. „The owners are nice and helpful people. They are always around and even if people arrive at night they open the door and show them the rooms. There is always food, tea and coffee and we can prepare our own food“, Ahmed explains while preparing a traditional chicken dish in the kitchen.

A Syrian father stayed with his family in the hostel for a week and is now leaving to the Hungarian border. He tells us: „My wife was sick and we had to stay in Belgrade and couldn’t move on. It was great that we could stay in this place for this time.“

The rest house was initiated in 2015 when the number of refugees arriving in Belgrade increased rapidly. People were sleeping in the parks next to the train station. To have a place where at least the vulnerable and sick can stay, the hostel was turned into a resthouse. Marco immediately liked the idea and turned his hostel, which he has been running for almost ten years, into a resthouse for migrants. Since then, the hostel is always ‚fully booked‘. “Especially in the winter it was really hard. Lots of people stayed outside and were looking for a warm place to sleep”, Marco explains. “As we anyways closed for the winter month as not many tourists come to Belgrade, we thought it is the least we can do to open it up for the migrants.”

Every day there are people coming and others leaving the house. People are being sent to the hostel from NGOs and volunteers in the parks. People from all different nationalities are staying in the house – especially vulnerable persons and families with children but if there are free beds left, single men are also accommodated.

Next to the five bedrooms, the house provides a shared kitchen, two bathrooms with a washing machine and an outside space with a garden. Outside, children are playing with a ball. „The atmosphere in the house is really good, people are organizing themselves„, Marco tells us. „Of course there are also conflicts and sometimes people don’t stick to the rules, but so far there were no mayor issues. We are always around 24-7 to welcome newcomers and to help dealing with problems.“

Marco is also happy that the hostel is well-accepted within the neighbourhood. „The location is ideal, because there are no direct neighbouring houses. Therefore, there are no complains about noise. Sometimes people even come by and bring food, clothes or toys for the kids.“ Since the beginning of the project, there is an agreement with the city council and the resthouse is tolerated. 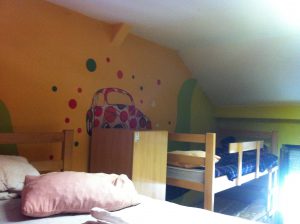 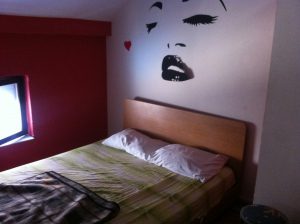 During the last weeks, the number of people staying in Belgrade has been rising again. On the one hand, more are arriving from Greece, on the other hand, Hungary has increased its border surveillance and is pushing more people back. Belgrade has become a bottleneck. Up to one thousand people are currently staying in Belgrade. The official camp Krinjaca in Belgrade is overcrowded and many people sleep outside in the public parks. The very bad conditions in unofficial transit camps at the Hungarian border and the violence people experience when crossing into Hungary on their own make people return to Belgrade for some days. This is what L. told us, who is staying in the resthouse with her children:

We crossed the border to Hungary but the police caught us and made us walk back. We had to cross through a river with wastewater up to our necks. When we came back to Belgrade, we were lucky that we could stay here in the hostel, shower, wash our clothes and rest after what we experienced.“

Resthouses along the Balkan Route are an important way of supporting people on the move. These places also offer the possibility to distribute independent information about the Route and allow people to plan their next steps. 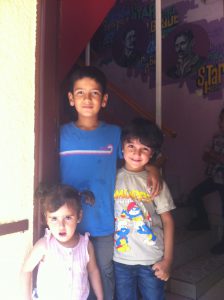 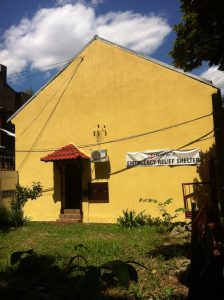