After we have been in Athens for some days, we are back in Idomeni now. Also there have been some changes in the team. However, the camp in Idomeni got much more structured and professionalised, as the ones of us who left Idomeni three weeks ago immediately recognized. Furthermore, there are much more big tents from MSF and small „private“ tents now then three weeks ago. The police is still present with some buses in the camp, but acts very passive, although the railway tracks are blocked since days. 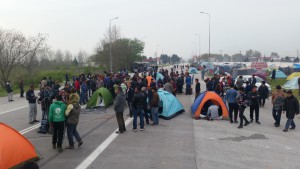 Blockade of the highway 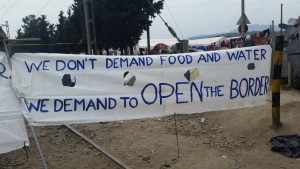 On the railway tracks 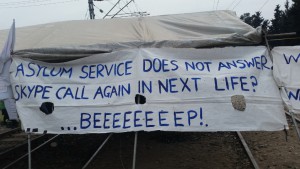 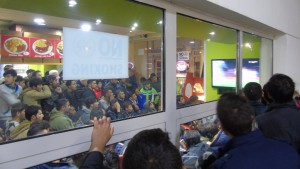 During the day, more than 200 refugees blocked the highway E75 to Thessaloniki. The blockade took place in front of the informal camp at the Polykastro gas station (about 20 kilometres away from Idomeni/the border), where some thousand people are currently living. During the blockade, children were playing football on the highway. In the evening there were still some people and tents on the highway, but cars could pass by. Many people watched the football match between Real Madrid and FC Barcelona in the shop of the gas station.

Close to the gas station in Polykastro there is the „official“ camp Nea Kavala, which is located on military ground. Visitors are not allowed to enter and the atmosphere is more tense than in Idomeni, due to police and military presence. Even from outside it is forbidden to take photos of the camp and we were told to leave the area immediately, even though we were not taking photos. Anyway, we will visit the other „official“ camps in Northern Greece the next days and report here.