Today was a beautiful sunny day. The camp atmosphere was partly like on a festival: Volunteers played with the children and humanitarian organizations distributed food. Some little improvised shops have already opened days ago on the main route through the camp, selling vegetables, pots and even hair colors, styling gel or shoes.

But this is only the one side: Behind the fence and the barbed wire, a tank is parked with a machine gun on the top. In addition a water cannon is placed directly behind the now closed door, which was the former entrance to Macedonia. 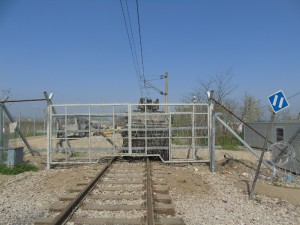 Tank with machine gun on the top protecting the border 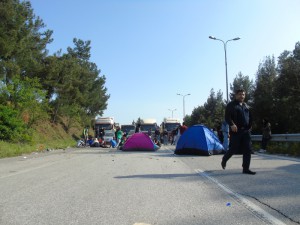 E 75: Hundreds of trucks were blocked

On our walk along the fence we met a woman who has a husband in Austria. She arrived in Idomeni just one day after the Balkanroute was closed. Now she is trapped in the camp – like many, many others.

Later this day, a group of refugees of different nationalities blocked the entire highway E75 at Hotel Hara some hundred metres away from the official border crossing and demanded the opening of the border. Hundreds of trucks were blocked. We counted at least 150 trucks. Furthermore, buses and cars were blocked. Activists supporting the blockade brought warm food and water to support the protest.

Voices from the blockade (translated from our great Kurdish translator):