18.00: Empty tents in Idomeni and a lot of destruction after the police operation.

17.30: The camp is completely evicted now and journalists and observers are now able to reach the empty camp and no longer blocked by the police. All people are said to be brought to the Taekwondo-stadium (see picture below) in Athens. Yesterday there were already 750 people sleeping there; probably it will become totally overcrowded tonight. 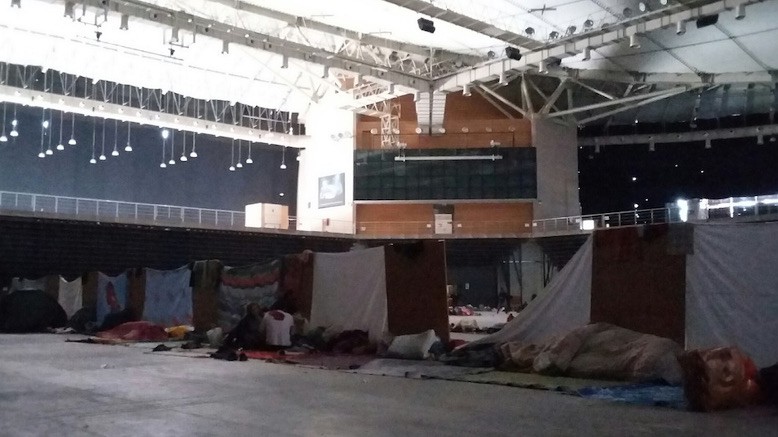 16.30: We observed how people from the NGO Praksis searched the tents and told the police that they found a person hiding in a tent. This person was then brought to a bus to Athens. [Update see below / 10.12.2015, 21:37 CET] We have obtained conflicting versions of the event described above, and have moved the respective accounts to the end of this post. [Update see below] The train tracks are empty.

15.30: A bus with new people just arrived in Idomeni (see picture below). It appears that the transit procedur is supposed to go on for the three nationalities allowed to pass. At the same time around 300 other people, mostly families, are pushed into buses bound for Athens. The police cut open a big tent in which people stayed who are refusing to be taken to Athens and removed them from the tent.

14.40: Police presence is still massive: Nine buses full of cops are at the camp. Six buses with migrants are leaving to Athens. Still several hundreds of people in the camp. People are being brought out of the police barrier, with their hands tied up. Eye witnesses reported that police did used violence when people were pulled out of their tents, even against families with children.

13.20 Police tries hard to prevent any (media) coverage: People who have tried to take pictures from inside the camp have been arrested this morning. Follow #idomeni on Twitter. Protests are still going on: Inside the police barrier, migrants are shouting: „We don’t go back.“

13.05 Around 300 migrants refuse to enter the buses. According to media reports, the ten arrested people have been released. One injured person is brought to hospital.

13.00 Ten migrants have been arrested. Apparently there are protests happening at the border.

12.30 Still several hundred people are inside the camp. UNHCR estimates the eviction to take two more hours. The police said the camp will then reopen only for the people allowed to cross the border. A train carrying goods was brought from Macedonia across the border just now.

12:00 There are various areas that are surrounded by the police and military and people are pulled out. More than ten buses left to Athens. It is said that they go to the Taekwon-Do stadium there, but it was already full yesterday. According to the police, the arrested migrants are taken to the police station in Thessaloniki. One group of people was badly beaten by the police.

11:15 One friend from inside reports that police started to clear the railway tracks. People are pushed out of their tents. We heard of more arrests, but not of any injuries yet.

11.00 We are kicked off the area by the state persecutor, with the help of Medicin du Monde. More and more press is arriving but stopped by the police at the highway exit.

10.30 For all those who want to come: Take the mountain road via Hamilo. Police wants to send us away right now.

9.50: Police has blocked access roads to Idomeni. We cannot enter. MSF reports that everything is quite calm, but journalists have been arrested in the morning. People are loaded into Buses to Athens. Friends from inside the camp report that police has surrounded the camp and don’t let anybody leave the camp. One migrant friend was arrested.

9.40: The eviction seems to start soon. We will start reporting in twenty minutes.