Some impressions of today, we will continue reporting tomorrow. 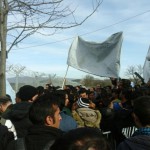 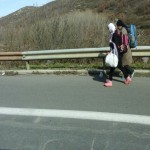 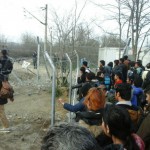 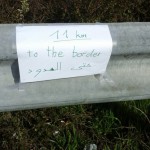 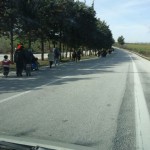 17:00: Situation calm. The border area has ceased to be a completely police-controlled territory. Now people are setting up tents here. The camp is completely overcrowded as the border is closed and many SI people cannot pass as they don’t have passports. Reportedly, Polykastro gas station is nearly empty because most people left on foot earlier in the day and buses are said not to be allowed to leave Athens. Meanwhile, reports reached us from Piraeus port that the people waiting there are staging protests and blocking the roads.

16:00: Macedonia deploys a tank behind its fence. This is what European Union and its partners‘ politics look like.

15:15: Dozens have destroyed the Greek fence protecting the railway tracks.

15:00: Macedonia has deployed more riot police behind its fence.

14:30: Hundreds of Afghanis have broken through a police chain and are squatting the immediate border area.

14.00: Protests of the Afghans stuck and separated in Idomeni camp have arisen.

12:00: Tired of waiting several days at the gas station, hundreds decided to walk on the highway towards Idomeni. It is a 20km walk. Among them many families, injured and old people.