PDF-Download: Report on Police Violence during Push-Backs from Hungary

Currently, there are around 300 people per day arriving in Serbia. They come either from Turkey through Bulgaria or from Greece through Macedonia. The accounts we hear from people stopping over in Belgrade are of difficult journeys, often with violent encounters with authorities or gangs. In Belgrade, many people rest for a few days before they continue their journey to the Hungarian border. There are two transit zones where people can legally enter Hungary. However, people often have to wait for weeks before it is their turn to enter. The conditions of the camps at these transit zones are miserable. Therefore, many people try to cross the fence into Hungary on their own. After having entered Hungary, people face three scenarios. They are either pushed-back to Serbia, detained for some time or sent directly to open camps. From the open camps, most people try to continue their journey towards Austria.

In the last days we witnessed an increased number of people who left for Hungary returning to Belgrade. They crossed into Hungary, but were caught by the police and pushed back to Serbia through a hole in the fence. Many people reported violent behaviour by the Hungarian police, including pepper spray, electrical shocks, beatings and setting dogs on them.

On Wednesday 22 June, at least 50 people returned from the border. We spoke with people from a group of twelve and another group of 23 who testified having had similar experiences. This is the recorded report of one of them. It is representative of the experiences of many others. It contains explicit details and images of physical violence.

I walked for ten kilometres in Hungary and the police came and beat me. They cut a hole in the fence and pushed us through the fence. We were twelve persons and the police beat all twelve persons. One had a wound on his head with blood. They had a helicopter. And they also used electric shockers. And they also had pepper-spray. This is very dangerous. If the refugees go back to Serbia they can not see anything. They go there and fall in the fence with razors so they have a lot of cuts. 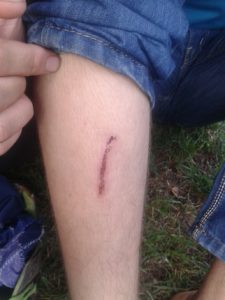 (shows a wound on a friend’s leg)
This is from a dog. The dog bit him. This was five days ago. 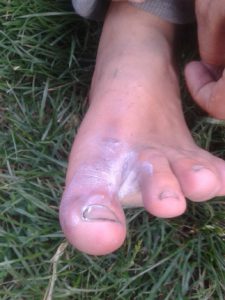 (shows his swollen and bruised foot)
My foot is hurt. I cannot walk. And this is also a problem, I cannot walk and they beat me again and again. I could not walk very well all the time because this was five days ago. If you can see this, my foot is big and swollen.

I tried to cross the border three times in four days. No sleep, only running and walking. We walked through dirty water like this (points up to his neck) two times. We had nothing to drink, we drank the dirty water from the ground. No food. The third time I walked ten kilometres without water. And I have also kidney problems. I told the Hungarian police that I have kidney problems and they beat me again. I told them ‚give me water‘ but they didn’t give me water. And we had one family with us. They beat one of the family one the head and broke another one’s bones (points to the arm) and there was also one sleeping child, five or six years. And the family and women, they beat them on their head.

Why do they beat us? At first we all face the Bulgarian police and they all beat us. The Serbian police they are very good. When they caught us they did not touch us and said ‚go to the border, go to Subotica‚ and ‚go to Belgrade‚. They do not beat us. But why did the Hungarian police beat us? And what is the rule of that ten kilometres? Why can they beat me?

My message is that: They cannot beat the refugees. Because refugees have no food, no water. Then they beat them so they have even more problems. My message to the other EU countries is that they should force Hungary so they do not beat the refugees. Because they had a lot of problems, that’s why they came in this country. They are not a million, not a billion who come there. We had a lot of problems, that’s why we have to come to Europe, Germany, France, Italy or Austria. If they have a new law, that’s ok. But they can not beat us.

So my message is that all European countries should force Hungarian police and Bulgarian police to stop beating us and they should help all misafir.