Startseite »Analysis»Moving Europe Report: Six Weeks after the Closure of the Balkan Corridor

«Why did the EU close the border? We came because we thought we can seek protection in Europe, but now we are placed here in a tent in the forest with nothing»

On Greek islands
On Greek islands like Lesvos, Chios and Samos over 7’000 people are detained and threatened to be deported to Turkey. Since the 4th of April around 300 people have already been deported to Turkey. Even though Greece has assured not to deport people without examining their asylum claims, there have been reports of them doing so such as was the case on the 4th of April 2016, see e.g. here. People who crossed the sea and reached the Greek islands after the EU-Turkey deal are being held in detention centres like Moria in Lesvos and Vial on Chios. Conditions are said to be unbearable and deteriorating day by day.

Interceptions by Turkish coastguard
At the moment only few people make it from Turkey to the Greek islands. The Turkish coastguard intercepts boats with the help of Frontex and 5 Nato vessels and forces them to go back to Turkey. See e.g. here: 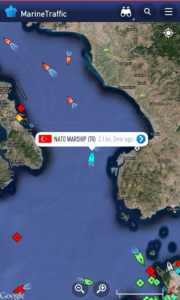 Camps in Greece
«There are no organisations here, no journalists, the UNHCR has been here once. Now the Pope goes to the Islands. The media is on the islands and at the border. We are forgotten here.»

In the last two weeks Moving Europe was present in 9 different Camps in Northern Greece: Andravidas, Filipiada, Katsikas, Doliana, Kozani, Diavata, Nea Kavala, Cherso and Idomeni. In all nine camps people are determined to travel on to central Europe. It can never be stressed enough that living conditions are not the prime concern for the people, but rather it is freedom of movement that they are demanding. However, it must be highlighted that the living conditions in some of the camps – for example in the horrible camp of Katsikas – are intolerably bad. This causes a lot of suffering to people looking for protection in Europe. This situation is not the result of a humanitarian crisis but the result of the closure of the Balkan corridor and it is politically produced. 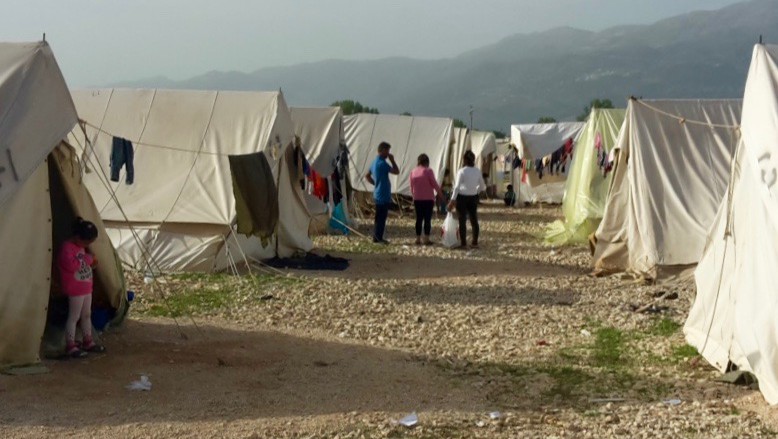 Struggles
«If we do not scream, nobody will hear us. This is why we block the highway. »

There are daily protests from the people that are stuck. Mainstream media covers only the protests in Idomeni and often describes these as being incited by political activists from Western European countries – thereby denying agency to the people stuck. In other camps like Katsikas people have also fought for their rights and blocked a highway. Greek riot cops suppressed this protest and threatened those who got arrested with deportations to Turkey. You can find more information here. The Turkey deal and the fear it produces is used as a repressive threat against people who protest against the inhuman circumstances they have been placed under. 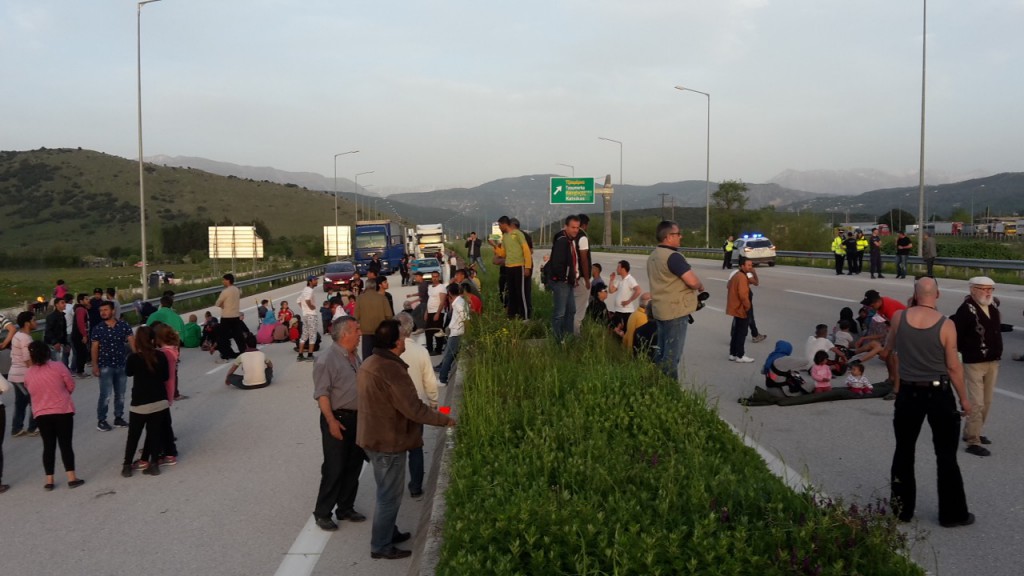 Other groups of people struggle for better accommodation. Moving Europe spoke with people coming from the now closed camp in Nea Karvali and refused to leave their buses in different camps (e.g. Larisa and Katsikas) because the conditions were so bad. After a 4-day bus journey through Northern Greece they were finally brought to a newly opened camp in Volos and to a camp near Thessaloniki. Because of their collective act of disobedience they are now housed in better camps.

No information about legal options
«It is hard to wait without knowing for how long.»

Even six weeks after the closure of the Balkan corridor many people still have no access to information. In secluded camps in the north, only the military is present and supplies food and basic medical services. It is no surprise that the question of whether the border will reopen or not, is omnipresent. In addition to the lack of information comes the feeling of being forgotten by media and NGOs. It is no surprise that Moving Europe met several people who went back from “official” camps like Katsikas to the “unofficial” camp in Idomeni, which, despite being an unofficial structure, is far more covered by media and humanitarian organisations.

Asylum via Skype
«We have tried to call via Skype many, many times. None of us ever got through! The system is not working.»

Family reunification
«My husband is waiting in Germany and I cannot go to him.»

In all the camps that Moving Europe visited, thousands would have the right to family reunification under the Dublin III Regulation (w2eu). People who have their spouses or underage children in another European country have the right to live together with them and to have their asylum claim examined by the same state authority as their core family members. But again, in order to start this procedure they have to get an appointment with the Greek asylum services. To do so they have to reach the office via Skype. And as described above, this is a near impossible feat. 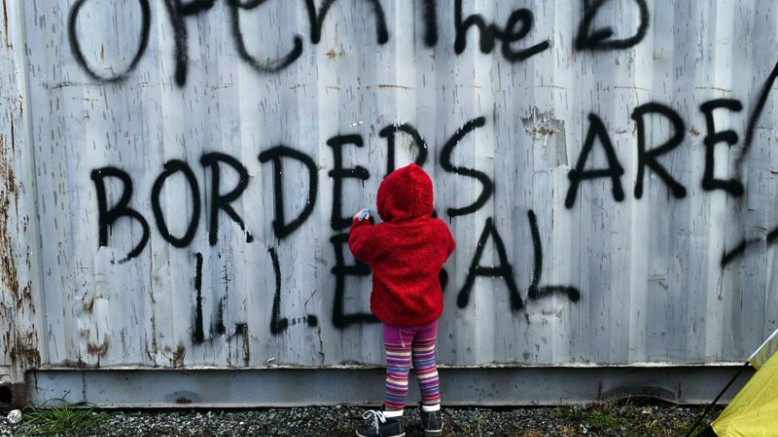 Smugglers are back in business
Of course, the closure of the Balkan corridor has put the smugglers back into business. People who have some money left are still travelling from Greece to central European countries. However, their journeys have been made more dangerous and more expensive. People who are trying to reach the EU now have to take even more dangerous routes. To date, this year over 1’000 people drowned in the Mediterranean Sea.

The movement continues
As the above-mentioned points have illustrated, the closure of the Balkan corridor is producing an incredible amount of pain and suffering for people seeking safety and a better life in Europe.
We condemn the structural violence that is exercised by EU politicians over thousands of people, trying to deprive them from their freedom of movement. Nevertheless, people currently stuck in Greece will not forget the struggles of their families and friends who made the Balkan corridor possible last summer. Closed borders and barbed wire fences cannot stop migration movements. 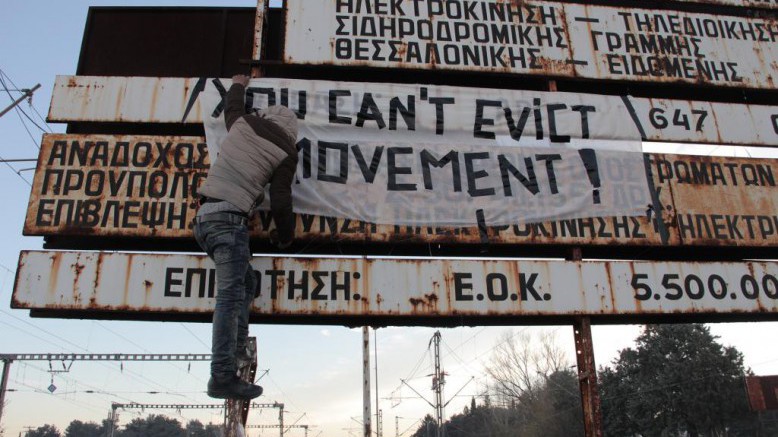 About Moving Europe:
The project is continuously providing independent information for people on the move and is strengthening political networks along the route. At the same time, Moving Europe documents the consequences of political decisions, border violence as well as the resistance against it.