Startseite »Analysis»„The nationalist narrative is on the rise, sponsored by the government“ – An interview with activists from Macedonia

Moving Europe discussed with Macedonian activists about the current situation in Macedonia, the ongoing revolt against the government and the links of this protest movement to the migration movements. Read the answers here.

How did the left-wing movement and the protests in Macedonia evolve?

The protests can be traced back to the past, especially the context of the right-wing nationalist government, which has been ruling the country for 10 years. During these years, the government has worsened every social aspect of society, and democracy and freedom of the press deteriorated. At the same time, clientelism is rising, meaning that people get employed because of their party affiliation. Moreover, the nationalist narrative is on the rise, sponsored by the government, and before it was not very strong.

In response to this situation, a progressive movement started rising up against the government, formed by an increasingly strong left, but also many protesters in general. The protests started in the end of 2014 and continued into 2015. The protests were happening every day, and created what the officials call a ‚political crisis‘, showing that the government – which had been solidifying its position for almost 10 years – was actually shaking. Now we started protesting again.

What was the common ground for the leftist movement and what was the process towards starting a common party?

Everybody is fed up with the government, which turns a blind eye to everything that civil society is asking for. Given this context, members of the left movement decided to try to make changes by forming a political party, participating in elections and perhaps forming part of the government. In the beginning the movement and its members were hesitant, because becoming part of the governmental structure implies a lot of concessions. The left-wing movements have been active against the current government since it came into power. Nevertheless, they decided to create a political party that will possibly be established as a body in parliament at some point in the future. A lot of the movement’s members joined the left-wing party. However, at the moment the left-wing party is boycotting the upcoming elections. The government had promised to clear up the irregularities in the voting lists, and this did not happen. The left-wing party exists, but it refuses to participate in the upcoming elections, and almost everybody is protesting against the government, almost all parties refuse to participate in the elections. 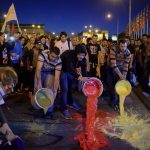 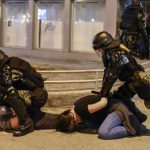 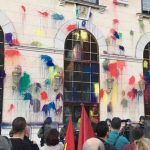 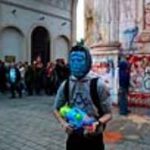 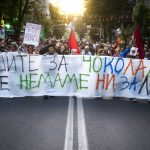 Who is taking part in the protests, politically and socially?

Politically, everyone is taking part in the protests. The mainstream community is calling these protests „the colourful revolution“. Firstly, because we started colouring buildings with paint, but also because people from a very broad political spectrum are participating. The left has been very present with red flags since the beginning, but there are all sorts of people – a more liberal NGO sector, some libertarians who bring banners complaining that government control is diminishing economic growth, even some deceived party members from the ruling party. Really, almost everybody is participating in these protests.

However, both in the party and in the protests, perhaps not all layers of society are represented. It is still pretty hard for an impoverished worker to even come to a protest. Many of them are under the umbrella of the government – one of the ways the government got votes is by employing people and making them dependent. Many of those who got jobs through the government – whether poor or not – are not only afraid to be seen on the protest, but must actually appear on counter-protests. And this clientelism between the government and the workers is a bit split from the intellectuals, such as the founders of the left party and the left movement. Historically, the intellectuals do not have a really strong connection to the workers, but now work is starting to be done with syndicates and workers unions, trying to slowly de-clientelise the society. However, this is a very slow process, because the regime has no separation between legislative, executive and judiciary. The government is everywhere, there is no separation between the state and the party, the party is the employment bureau for the people, but it goes way beyond employment, it is in every level of society, even in the private sector, with big companies making concessions and compromises with the government. And people are getting more and more fed up with how corrupt the government is, but still many people are directly controlled. And even if you don’t have benefits from them, people are still very afraid to join the protests because they are afraid to be seen on camera, as there are policemen filming the protesters. So just people coming to the protests is a big deal.

What is the connection between the new left party and the social movement resisting the migration regime?

Some members of the new left party are directly involved in resisting the migration regime, some members were involved as volunteers for the refugees, doing field work and political work. Not that many people, but there is much support from them at least from a political level, at least for now. They formally and officially declared support for the refugee struggle, and empathy and solidarity with them, but it is unclear what this means in the long run. They are quite anti-capitalist, but not generally against border regimes. Rather, they oppose the restrictive and discriminatory border measures that are currently taking place, illegally, under the collaboration of the EU and Macedonia.

Do you know what the party’s approach to getting into the institutions is? Is there already a plan for new elections or is this too early to say?

There were supposed to be elections now, but all the political parties boycott these elections. The elections will technically be illegal, because we do not have clear sensus data. There is a lot of corruption in terms of the census, we have not had a clear sensus for more than 10 years. The ruling party manages to win the elections technically by doing many manoeuvres and a lot of corruption in terms of the people who participate in the elections. So all of the parties decided to boycott these early elections and hopefully there won’t be any elections. Because the only party that will participate in these elections for now is the ruling party and it does not make sense to have elections with one party only. But in the future, the new left party will surely participate in elections. The current protesters just demand that the elections are postponed until the electoral lists are being cleared out and we know who is voting and who is not voting – to not have dead people voting or having name voting for somebody who I do not support and things like that.

What are the main demands of the movement?

The main demand is the abolition of the decision of the president to grant amnesty to 50 corrupt political officials. This law was reintroduced, and then after 2 or 3 weeks he granted all these politicians who were being persecuted for their corruption, including money laundering and even murder cover ups. This sparked the renewed mass protests, which were a continuation of the protests years before. Now the main demand is that the president withdraws his decision, so as not to protect these politicians from the ruling party.

Secondly, we demand that the planned elections in June do not take place, because we are not ready for these elections. We need freedom of speech, we need media which is not controlled by the government, we need clear electoral lists, clear census data, not dead people’s names voting for the government.

What is to be expected for the next months?

What I can see from the concrete situation is that we expect protests to continue at least until the planned elections in June, or even further. We have experience with this, we already did two months of everyday protest last year. Now it is deepening, more and more towns are protesting. This is a historic moment, it never happened before. A constant number of people are participating, the energy is not dropping and the persistence remains or even becomes higher because everybody is deeply concerned by what is going on. So we do expect that protests continue for some time.

[This interview was recorded in May 2016]