The camp of Vagihori is about half an hour form Thessaloniki, in the eastern outskirts. It is located directly on the highway towards Kavala, at the bottom of a mountain range. The tents have been set up next to a field and fenced in. there is no protection from the sun, and it gets very hot during the day. The village of Vagihori is not to far from the camp, following the highway. However, apart from this small village, there all opportunities for social life and shopping opportunities are inaccessible.

When we visited the camp, most of the tents were still empty. In the past days, the police brought only around 8 families, approximately 60 people, to the Vagihori camp. Police and military guard the entrance and allow only the camp inhabitants and registered NGO members to enter the camp.

While talking to people outside the camp, we learned that the showers, sanitary facilities and food supplies are said to be sufficient as there are only around 60 people staying there. Furthermore, medical care is provided on site with a doctor who is coming regularly to the camp. The food served by the military however, is not very satisfying and people would like to provide and cook for themselves.

Some people staying at the camp told us that they were not brought there from Idomeni, but from Bulgaria. They were caught by Bulgarian police forces and pushed back to Greece. Back in Greece they were picked up by the police and brought to Vagihori camp. Several people tried to refuse entering the camp when they were brought here. However, the police stopped them from going back to the buses and instead told the bus drivers to leave. Some groups decided not to enter the camp, to stay outside and wait for an opportunity to go to Thessaloniki. People inside the camp also told us that they are planning to leave the camp and go to the bigger cities, Athens or Thessaloniki. Some people are so fed up with the situation they are placed under they stated that they will go back to Iraq. After months of being kept waiting and fobbed with promises that have not been met, M. said: “The situation in Europe turned out to be unbearable for us.” 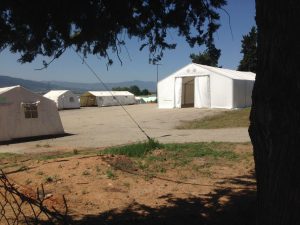