Today the Greek authorities handed out flyers in different languages, stating that people have to leave Idomeni and move to military camps. The flyer states:

This settlement does not cover any of your basic everyday needs. It will end its operation. You should move to the camps run by the Greek state, in a fast and coordinated way (…). Soon after your enter the reception facility, the Greek Authorities will give you information on your right to apply for asylum in Greece (…). 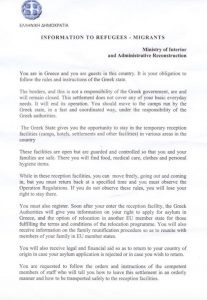 Speaking to different people in Idomeni, many voiced their disagreement with the content of the flyer. An old Syrian woman explained, that she spent three days in Nea Kavala, one of this state run camps. She felt, that the camp in Idomeni offered better conditions of living:

”Here we have freedom; there it was like a prison“. This is why she returned to Idomeni.

“I thought this is the 21st century”

Many other people told us the same thing. After having visited many of the camps in the past weeks, Moving Europe shares the view that the military camps are by no means better than Idomeni (see e.g. our report on Katsikas, Doliana and Kaval)

People are getting more frustrated and angry day by day. M. from Damascus expressed his view of the situation:

„It’s a scandal that we have to live under these circumstances. I thought this is the 21st century! People in the European Union seem to care more about their pets than about us refugees.“

People on the move manage to travel despite closed border

He adds, that for many families the situation is deteriorating. Many families run out of money and have literally no satisfactory options left: They can neither apply for asylum nor for the relocation program, as the only option to access these are via Skype which is not working (read here), moving to an official camp will not improve their living conditions and paying a smuggler is not possible anymore. This is way many people try to walk through Macedonia/FYROM. However, a lot of people get caught and sometimes even robbed and are then illegally pushed back to Greece, ending up back in Idomeni.

Nonetheless, every day people on the move manage to travel on to his or her destinations. But because the borders are closed, there is a lot more costs and suffering involved.