Numerous newspapers reported on the forceful eviction of the occupants of the train tracks close to the Greek-Macedonian border crossing by Greek police on Thursday. Contrary, the situation in most of Idomeni remains largely the same – a situation characterised by the daily struggles of living in tents, makeshift shelters or abandoned trains, by uncertainty, waiting, lack of information and continued attempts to move on despite the closed borders. Discussions revolve around alternative routes and the next political deal or decision, which will impact on the lives of thousands of refugees.

Moving Europe continues to receive testimonies of push-backs from Macedonia to Grecce every day, but also news from people who finally arrive in Belgrade. One family was again unlawfully returned to Idomeni after another long night of walking across Macedonia, while another person managed to cross Macedonia on foot. 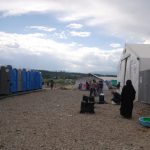 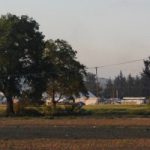 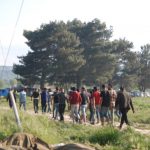 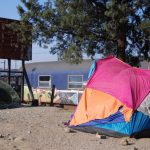 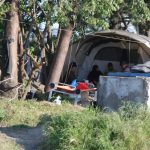 Moving Europe discussed the situation in Idomeni with M., who grew up in a city close to Damascus and has been stuck in Idomeni for several months.

What do you think about the current situation in Idomeni?

The situation is very difficult. I cannot go back to Syria, and I cannot continue the journey. The weather here is sometimes too cold, sometimes too hot. Many people here are sick, but cannot get proper treatment, because the official organisations do not have enough resources. I also have a medical problem. And after so many weeks in Idomeni, I am running out of money, if I don’t get support, I don’t know, maybe I have to become a thief. All I want is a small place to live and to work. There are so many problems here in Idomeni. What should I do? In Syria death is quick, here death is slow.

Do you have any possibilities to move on?

I tried to cross to Macedonia twice. But both times the Macedonian soldiers forced me back to Greece. They did not touch me, because I was carrying a little boy, but I saw how they hit other people. I will try again.

Also, every day, I go to the UN office and to the organisations in Idomeni, to ask about the Skype. I want to call and apply to get away from Idomeni. I do not care which country, for me it would be okay to go to any country for relocation. Yesterday we went to the UN office again, they said no Skype. When we asked today they said okay, but in the end it was not possible again, we asked why, and they said now it is finished. Again and again, they say tomorrow, maybe it will be open tomorrow. And they do not fulfil their promises. So we made a protest, we do not want more false promises and we want to know what we can do to change our situation and what will happen to us.

What about the official camps run by the Greek military?

I went to one of the camps, to Katerini stadium. The officials in Idomeni showed me pictures of the camp, and said that I should go there and that there is hot water and organisations to apply for asylum or relocation. But this was not true. The camp was cold, there were mice, and very little food, just one croissant and one juice for breakfast. I came back to Idomeni the next day. I did not really know where I was, so I had to pay a taxi and it was expensive.

I will try again to cross Macedonia.

With many thanks to Mohamed for the translation.